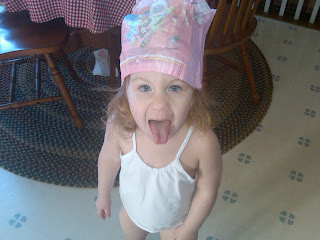 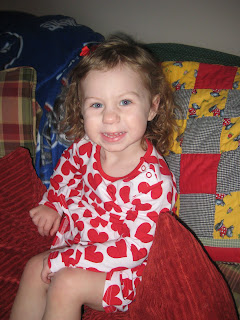 I got this cute V-Day dress for Miss Yay Yay. She had to wear it a little early.
Posted by Shannon at 3:00 PM No comments:

Posted by Shannon at 3:00 PM No comments: 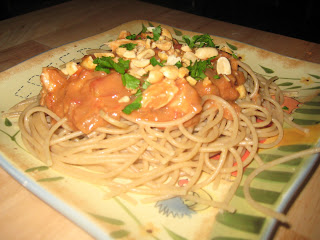 Tried this recipe tonight. Delish! (Thai Chicken and Noodles)
Posted by Shannon at 2:59 PM No comments: 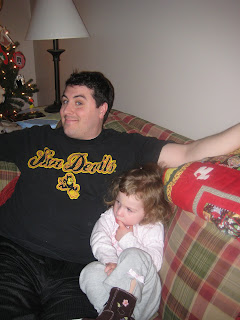 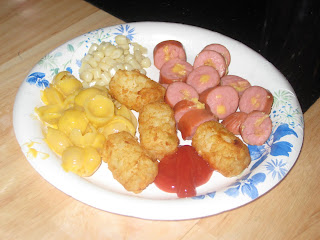 Nothing but the best around here!
Posted by Shannon at 7:01 PM No comments: 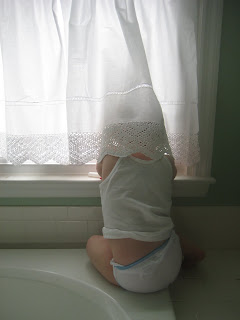 Reagan just loved watching the snow in her undies.
Posted by Shannon at 6:59 PM No comments: 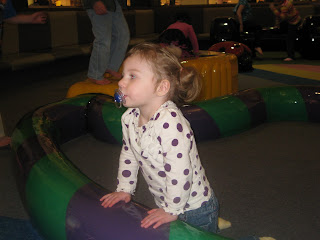 Reagan having fun at the mall play land...
Posted by Shannon at 6:58 PM No comments: 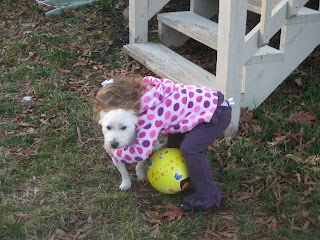 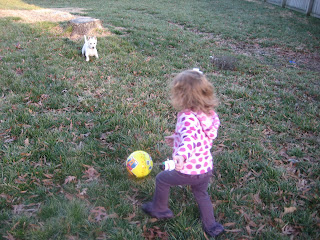 We decided to go out back for a little while this afternoon. It got a little chilly, but Rea and Win had fun together.
Posted by Shannon at 1:50 PM No comments: 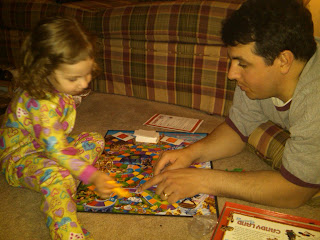 Pretty cute, huh?
Posted by Shannon at 7:58 PM No comments:

This morning I attended the funeral of a woman from church. I didn't really know her, but I have known her grandson for years, so I felt like I should go. Edith, the grandmother, used to attend church every Sunday with the assistance of her son, who happened to be her next door neighbor. She was tiny and sat in her wheel chair and every time I saw her, she would give me the nicest, friendliest smile. Many times, I would watch her son gently pick her up and either place her in the church pew, or the front seat of his big ol' truck. Though slight and frail in her later years, I learned a lot about this giant of a woman today.

For one thing, her family loved her. And she loved them. She eloped at the age of 18 with her sweetheart George. Everyone who knew her well, was always hugged and kissed goodbye and told the words, "I love you a bushel and a peck and a hug around the neck." What a memory to have of your grandmother! Upon hearing this little bit of info, I got a little weepy thinking about singing that very song with my grandmother when I was little.

My friend Jason sang "In the Garden" at the funeral with his sister and paid a beautiful tribute to his grandmother. Jason used to visit her every Sunday and read to her. I don't know who benefited most from those visits. His Sundays will never be the same.

As I was driving home, I started thinking about all of the old folks I've known throughout my life. Of course there are my grandparents. The two I grew up closest to are still alive. Grandaddy isn't doing so well and I know the day will probably soon come when I get the dreaded phone call. He's 88 and his body is feeling every one of those years. His wife, Mana, turned 80 in October and she has always been independent and ready to go on an adventure at the drop of a hat. She hasn't been able to be footloose lately, and I know she's missing it.
My dad's mom, Granny, died a few years ago and I never met his dad. I have always wondered what he was like. One day I'll know.

In June, my aunt, Brenda Jo, died suddenly at the age of 64. No, I don't include her on my list of the elderly, but she was a part of my life. In the past six months, I have wished I could see her one more time. Just to give her another hug, or sit around and chat a little bit.

I was fortunate throughout my childhood to get to know some pretty spectacular seniors who weren't related (by blood, that is.)
First, there was Hope Nash. Hope and her husband, Barron, were my dad's pseudo-parents when he moved to Northern Virginia in his 20s. They never had children and really treated him as their own. Barron died when I was little, but Hope lived to be in her 90s. My family would regularly visit her in her brick house on 18th Road in Arlington. I can still smell it. She would always offer us a "gingah-ale" and called my brother pink cheeks. As she grew older and weaker, she had a few different caretakers live with her. On one particular Thanksgiving, her helper, Ermond, sang to us at the dinner table to express her appreciation. My dad and brother had to carry Hope up the steps and into the house in a white plastic deck chair that day. She was worried they wouldn't be able to lift her. All 90 pounds. (In her younger years she was a lot heavier) I remember once going with my parents to pick Hope up for a wedding and my mom curled her hair to get her ready. Hope eventually went to a nursing home in Reston, where we'd go visit every Monday night. I loved those visits and wish I could still go on them. Thank you, Hope for loving my dad (and the rest of us), baking him black walnut pound cake (that can't be replaced) and adding words like "whookie" to our vocabularies.

Then there's Juanita Hove. Juanita ran the old Miss Richmond Pageant for years. She walked like someone with bad knees. You know, one side to the next, rocking back and forth. She wore her gray hair in a bun and smoked long cigarettes. She and I shared a hotel room once (not sure why) and she always talked about me walking on my tip toes.

Jay (Jay Bird) and Anne Lyles lived a few doors down from us when I was little. I was often over at their house playing with their grandsons, or cats (Muffin and Gypsy) and dog (Smokey). Annie was often found wearing moccasins and brush rollers in her hair and smoking a cigarette. I can still hear her scratching her arm. (Mom, you know what I'm talking about.) Jay died in the 80s and a few years later Annie moved to Florida. We always kept in touch until she died 2 summers ago. She wrote us letters (always writing the word "and" sideways) and they always smelled like smoke. How I wish I had her for a neighbor now! (P.S. If Reagan had been a boy, there was a good chance she would have been named Jay)

Not only were we fortunate enough to have Jay Bird and Annie next to us, Betty Betty lived behind his. She was also known as the cookie lady. Betty Conley lived in the other side of the tot lot and our back yards faced each other. She would often come down to visit when we were see-sawing or swinging. She always had Oreo cookies in a jar in her kitchen (which also smelled like smoke) and looked a bit like Betty Boop. Ah...those were the days.

Growing up, there were two special ladies we attended church with: Edie Cangemi and Phyllis Booth. Edie was a tough Boston Italian who raised 10 kids after her beloved Nick dropped dead of a heart attack in his 40s. She made homemade pasta (I can still see it drying on hangers in her kitchen), took in boarders, collected dolls (I won't say what kind) and loved my dad. She would wave to him every Sunday from the back row while he sat on the stand. She didn't have pierced ears and wore the same clip on pearl earrings all the time. She always wore heels and no pantyhose. Edie was a smoker for a lot of the time I knew her and always had heart problems. I can picture her in her white dress suit the day she went to the temple to be sealed to her husband. What a reunion I'm sure they had when she died in September 2001. It probably started with her giving him a slap on the face for leaving her so early.

Phyllis. Two words: oh, honey. Chances are, if you've talked to her, you've heard her say it. She has always been old! Probably because she has the whitest hair in the world. She has taken care of her son, Eddie, for over 25 years because he was paralyzed at the age of 18 after falling off of Mill Mountain in Roanoke. You've never met a kinder, more sensitive woman than Phyllis. I can always count on a big hug every time I go to church with my parents. (Phyllis is the only one on this list who hasn't died.)

When I met Devin I also met the G Man. Gary Mereu. (Baptized Angelo Mereu) He looked like a mob boss, but didn't have a mean bone in his body. He walked with a cane, loved his New York Giants, and was Devin's father, grandfather and best friend all rolled into one. Most Sundays of football season 2000 and 2001, I was at the G Man's house. I took naps on his couch, ate "macaroni" with him and loved every second of it. In February 2002 G-Man had surgery for prostate cancer. He spent a month in the hospital and never came home. He died in early March. My family and I made the trek to Port Washington, NY (the home of Devin's forefathers...on one side) to attend his funeral. It was an experience I will never forget.

How fortunate have I been?! When I think about these dear people I smile, laugh and cry. My life has been so touched. Losing people like them is why life is hard. I can't wait for the day when I can have them all together again and visit 'til my heart's content. No one will be frail or walk with a cane. I will thank them, give them a squeeze and know that I'll never lose them again.
Posted by Shannon at 4:35 PM 1 comment: 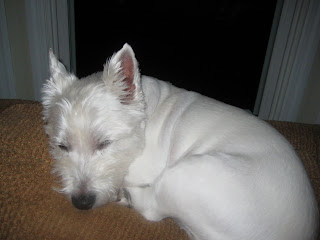 I told my mom to shoot Winnie if anything ever happens to me. This dog is ALWAYS by my side. It can be heart-warming, but lately it is annoying as all get out. I can't leave the room without her following behind. I can't lay on the couch without her at my feet. I can't walk down the stairs without her clearing the way. Seriously, Winnie!
I do love her though. She's my first baby.
Here she is in one of her favorite napping spots. She also sits here and waits for me to come home if I've gone anywhere. ( Yes, I know her hair is really short.)
Posted by Shannon at 5:51 PM No comments:

January 3rd - not feeling so hot 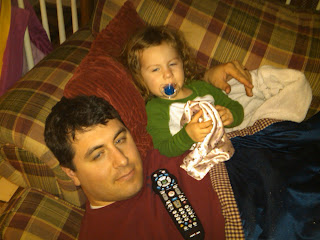 Reagan caught my stomach bug and hasn't been feeling too hot. Here she is watching "Family Ties" with Devin and winding down. She loves this show!
She and Devin look a little rough. Sorry, Devo.
Posted by Shannon at 5:49 PM No comments: 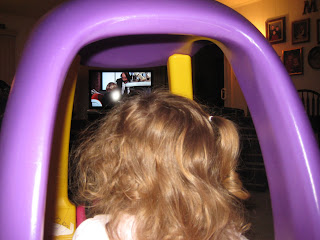 My mom got this car from a friend who was moving out of state and Reagan fell in love. Here she is watching Willy Wonka.
Posted by Shannon at 5:47 PM No comments: 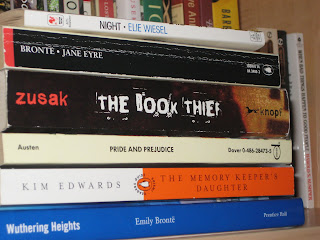 Well, it's 1-1-11 and that means it's a great day to start my year of 365 pictures! My mom put me up to the challenge and the excitement is building.
A gross stomach bug left me on the couch most of last night and today. Great way to ring in the New Year, huh? Devin and Reagan also left town today, so that left me with few options for my first picture. I took one of Winnie that was less than stellar, and my dark circles and shiny forehead just wouldn't cut it today. So, I got to thinking. Last year was a great year for my book club and just the other night we selected our books of 2011. I already own a few, so I thought I'd give you a preview of what I'll be reading this year.
Wishing you a wonderful 2011! (Christmas post later)
Posted by Shannon at 7:28 PM No comments: